PROVINCETOWN — For the past eight weeks, Margaret “Peggy” Joblanski, of Brewster, has been walking across the Cape to reflect and learn about racial and social issues through local history.

Starting at the Cape Cod Canal in July, every Wednesday Joblanski and a rotating cast of friends have walked 10- to 15-mile segments through each of the Cape’s 15 towns, having conversations about history and stopping at historical sites.

The idea, dubbed the Cape Cod Camino Way Project after the famous pilgrimage through Spain, came about after the killings of Breonna Taylor in Louisville, Kentucky, and George Floyd in Minneapolis.

“I started thinking about what do I really know about the lives of people of color on Cape Cod and racial and social justice issues, and how could I learn more,” Joblanski said Wednesday at Pilgrims’ First Landing Park, near the end of her walk and the supposed spot where the English first set foot in what is now Provincetown. 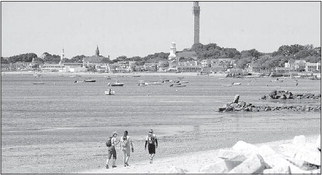 Margaret “Peggy” Jablonski, right, walks with Lauren Miklavic, left, and Chloe Heidepriem along the beach off Shore Road in Provincetown. Jablonski completed a Capewide walk Wednesday that she began July 8 to increase her understanding of racial and social injustice through the history of each town on the Cape. [MERRILY CASSIDY/CAPE COD TIMES]

This year marks the 400th anniversary of the Pilgrims’ landing, and the impact that had on the Wampanoag has been heavily discussed during the eight-week project, Joblanski said. Each week also had a theme, including health care, policing, the environment, housing and economics.

She has tried to get a fuller picture of the history of the Cape, working past the predominantly white version of events.

Now, after miles of walking across the Cape, Joblanski hopes to use the conversations and reflections she has shared with others along the way and turn them into action.

“The end result is how are we going to take what we learned this summer and use it for our action moving forward,” she said.

Friend Lauren Miklavic walked the entire project and was with Joblanski on Wednesday in Provincetown, where they were joined by Wilderness Sarschild and her granddaughter Saffron Jalbert, an eighth grader at Nauset Regional Middle School.

Saffron has walked in Black Lives Matter marches on the Cape but wanted to keep educating herself, including about local history that may have been missing in her school’s curriculum.

“It’s important, and it needs to change,” she said.

“I started thinking about what do I really know about the lives of people of color on Cape Cod and racial and social justice issues, and how could I learn more.”

Margaret “Peggy” Jablonski walks along Conwell Street in Provincetown on the way to a stop at Helping Our Women, an organization that supports Outer Cape women with chronic, disabling or lifethreatening health conditions. As part of an eight-week Capewide walk, Jablonski stopped at various places of significance in each town.

Click here to see this page in the eEdition: